he Iranian-American film-maker Desiree Akhavan, creator of the admirably spiky 2014 romcom Appropriate Behaviour, cites John Hughes, Lynne Ramsay and Todd Haynes as key influences on her latest film – a neat summation of the warring elements behind this engagingly subversive coming-of-age tale. Adapted from Emily M Danforth’s 2012 novel by Akhavan and co-writer/producer Cecilia Frugiuele, it documents the abusive “gay conversion” therapies inflicted upon teenagers by zealous Christians. Yet while the subject matter may be dark (self-hatred and self-harm are confronted head-on), Akhavan plays it with poignant wit, zest and a lusty sense of defiance, combining the bonding charms of a brat-pack crowd-pleaser with the psychological terrors of a prom-night horror flick.

In early 90s Montana, orphaned teen Cameron Post (Chloë Grace Moretz) is discovered making out with her best friend, Coley (Quinn Shephard), in the back seat of a car. In an attempt to exorcise her “SSA” (“same-sex attraction”), Cameron is sent by her evangelical aunt to God’s Promise – a rural Christian retreat where “gender-confused” youngsters are told that “there’s no such thing as homosexuality, just the struggle with sin”.

Under the Nurse Ratched-like care of Dr Lydia Marsh (Jennifer Ehle) and her “ex-gay” brother, Reverend Rick (John Gallagher Jr), Cameron is forced to itemise and confront the hidden traumas that have supposedly led her astray. “Your attractions are symptoms of a larger problem,” says Rick, whose passive-aggressive therapies include getting “disciples” to draw an iceberg on which they must list their formative “corrupting” experiences. As for Lydia, she is compared to “the mom from Carrie… like having your own Disney villain, but this one doesn’t let you jerk off”. 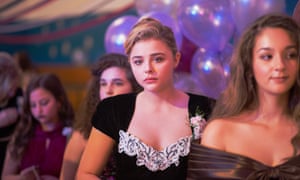 Initially bewildered by her new surroundings, Cameron takes comfort in the company of a pair of fellow misfits: Jane (Sasha Lane), who stashes pot in her prosthetic leg; and Adam (Forrest Goodluck), a Lakota boy who identifies as “Winkte”, or “two-spirit” (“he’s the Native American David Bowie”). Unlike Cameron, neither Jane nor Adam come from evangelical backgrounds, nor do they have any belief in the “pray-the-gay-away” mantras to which they are forcibly subjected. Jane was raised on a commune, but has been sent here at the behest of her zealous new stepfather. As for the drolly deadpan Adam, he is the son of an aspiring politician who is attempting to solve a PR problem. As always, it’s the kids who end up paying the price of perverse parental whims.

Like the mismatched members of The Breakfast Club, these are youngsters thrown together by uncaring authority, who find a common bond in their outcast status. It’s one of the lovely ironies of Akhavan’s bittersweet film that Cameron finds true friendship in a place dedicated to stamping it out, and there’s laugh-out-loud joy to be found in the acid-tongued interaction between these soulmates. Similarly, a scene in which 4 Non Blondes’ What’s Up blares from a transistor radio reminds us that the group singalong is an uplifting, life-affirming coming-of-age staple, from Stand by Me to Almost Famous and American Honey, the last of which first made a star of Sasha Lane.

The most affecting moments, however, are those in which even the resilient Cameron falls prey to self-doubt, ground down by the psychobabble bullying of the “de-gaying” process. Flashbacks to her relationship with Coley (with whom she watched movies like Desert Hearts on VHS) show tenderness, passion and love. Yet it’s the shock of discovery that haunts Cameron, oddly evoking the fragmentary, guilty nightmares of Midnight Cowboy. “What if this really is my only chance, and I’m blowing it?” she pleads in a moment of crisis. “I’m tired of feeling disgusted with myself.” Jane’s response is typically astute: “Maybe you’re supposed to feel disgusted when you’re a teenager.”

While Akhavan teases out the repressed-erotic absurdities of “Blessercize” workout videos, cinematographer Ashley Connor takes inspiration from the elevated naturalism of Kieślowski’s films, capturing the institutional nature of “God’s Promise” through a limited palette of beige and blue, contrasted with warmer hues in hand-held shots of the central trio’s growing friendship.

Like Spike Lee’s BlacKkKlansman, this is a film set in a past to which recent events have lent a horribly contemporary edge. The 2016 election happened mid-production, and the rise of Trump and Pence brings a chilling edge to the drama. All the more reason to embrace Cameron’s oddly universal story, and to seek out Akhavan’s quietly empowering (and often very funny) film.

The original article is here: https://www.theguardian.com/film/2018/sep/09/desiree-akhavan-miseducation-of-cameron-post-review